M.P. Pandit became a member of the Sri Aurobindo Ashram in 1939 upon graduation from college. He seized the priceless opportunity to live with his great teacher, Sri T.V. Kapali Sastriar, and learned several paths of sadhana from him, drenched himself in an atmosphere of intense tapasya, and became a scholar of Sanskrit and philosophy. Sri Pandit was the Mother’s trusted Secretary from his early years there. Of him she once observed that he possessed the only organized mind in the Ashram. 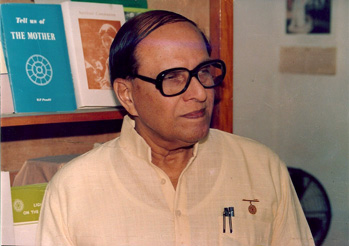 Sleeping hardly four hours a night, pouring himself constantly and attentively into detailed service to the Mother, M.P. Pandit was a giant of karma yoga. But his service was motived by his deep love for the Mother. Love in him was key and harmonized both work and knowledge.

And yet he is now best known for his career as an author. A lifetime of study yields competence in a single field. But writing in legions of subjects, M.P. Pandit authored scores of books which bear the mark of authenticity. His mastery was founded not just upon decades of scholarship, but as truly upon the strength of his practice and penetrating insight. He wrote convincingly because he lived the ideals he cherished. As a speaker, he was peerless.

Sri Pandit’s published work is enormous, filling 150 volumes. Distinguishing his prose is an affirmative vision that uncovers the Divine Reality manifest throughout the Universe. At the basis of this outlook is the integrating philosophy pioneered by Sri Aurobindo and the Mother. Uniquely merging the essential truths of India, — still vibrant in the Veda, Vedanta, and Tantra, — with the forward call of the Integral Yoga, Sri Pandit’s writings fulfill ancient ideals, but establish them in a changed world crowned with a radically new consciousness.

A resident of the Sri Aurobindo Ashram in Pondicherry for more than fifty years, Sri Pandit was closely allied with the developing new perspectives in the worlds of polity, science, and psychology. He was regarded around the globe as a consummate example in writing and deed of the evolutionary principle driving humanity forward. An All India figure, his visits to Europe and especially America left profound impressions and imparted inspirations that continue to uplift seekers.

Below are two talks given by Sri Pandit as part of a daylong seminar at the Wainwright House in Rye, New York, on 15 July of 1979. They include Sanskrit invocations by his editor, Vasanti Rao. Writing later in his Service Letter, he himself gave the background: “On the 15th a seminar had been arranged at the Wainwright House, Rye, by David and Navaja Mitchell. The theme was: ‘How can we share in the global unfolding of the New Consciousness?’ It lasted from 10 a.m. to 4 p.m. (with a lunch-break). There was a good attendance and friends from as far as Boston and New Jersey had come to attend it and meet us. The discussion was enlivened by the large number of questions that followed each session and I found it to be highly stimulating. Vasanti’s invocations were very much appreciated.

“As in other places, the one question that came up repeatedly was how to find the right Guru. I have been pointing out what Sri Aurobindo has said, viz., the true and only guru is the Teacher within. Each one has to awake to this Guru within. The role of the human Guru is to put one in touch with this inner Presence.”

Below is a short video clip, formatted for mobile devices, from a talk recorded in Pondicherry on 7 January 1990 and titled “Who is the Mother.” It is excerpted with permission from a DVD available from Dipti Trust entitled “On the Mother: Video Talks by M.P. Pandit.” All distribution, publication, and duplication rights are reserved by Dipti Trust, Sri Aurobindo Ashram, Pondicherry.

Below are links to Sanskrit chants:

Below are links to a number of Sri Pandit’s talks on yoga in audio:

Below are links to Sri Pandit's talks on "The Book of the Divine Mother" in Savitri: