Vasanti is unique. Rich in spiritual experience even as a child, she was a brilliant student who delighted both classmates and teachers with wit, charm and innocence. Drawn increasingly to spiritual life, she recognized Sri Aurobindo as her guru and became an Ashramite at the tender age of seventeen. Vasanti arrived at the Ashram on the 15th of August, 1947, just as India won her Independence and just when spiritual India celebrated the 75th birthday of Sri Aurobindo. 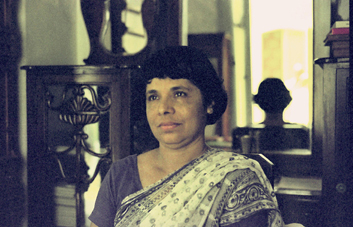 Vasanti began her service to Mother in the Library. It was a natural fit, for Vasanti was and is a littérateur, fluent in several European and Indian languages, a connoisseur of all the world's cultures, a blithe spirit with cosmic breadth. She joined the team working with M.P. Pandit a few years later, applying her literary, linguistic, and cultural skills to publication and management tasks. She eventually became M.P. Pandit's editor and secretary.

Vasanti avoids the spotlight, always, preferring the quiet of her own cave of tapasya in the Ashram. While she was gladly yoked to M.P. Pandit's relentless publication pace for decades, Vasanti is also esteemed for the purity and beauty of her singing voice. For years together, she opened M.P. Pandit's public addresses in India and in international settings with her evocative chants. We have heard the moved members of those audiences report that her voice threw them directly into a spiritual experience or a deep state of peace and receptivity. Vasanti's tunings of these sacred Sanskrit hymns and chants drew special notice from the Mother and still entrance spiritually-inclined audiences. Her public performances grew more and more rare over the years, and she has seldom been recorded.

We present here selections of Vasanti’s music. The “Guru Stotram” was recorded in the Ashram around 1960 in the dead of the night to reduce noise pollution. Other Ashram recordings follow. Listed next are two sets of Sanskrit invocations. They were recorded in 1979 at the Wainwright House in Rye, New York, during a daylong seminar presented by M.P. Pandit (vide M.P. Pandit on this website under the section, Words). The remaining pieces by Vasanti were recorded in Pensacola, Florida, in 1981.


Recorded in the Sri Aurobindo Ashram from 1960 on:

Hymn in Sanskrit on Sri Aurobindo and the Mother (11.7MB)


Recorded in the Wainwright House in New York in 1979:


Recorded in Pensacola, Florida in 1981: