The Center welcomes everyone to its collective studies, meditations, aesthetic events, public discourses, and weekend retreats, with participation by conference app as well as by personal attendance. We are both a study and a practice center, so conferring about the practice of yoga is available by appointment without charge.

The Center holds a collective study, satsang, every Sunday evening at 7, focusing on the practice of the Integral Yoga. Aspirants can normally attend by Zoom or in person. The prelude to our meeting is the Mother’s music and Sanskrit chants, succeeded by a presentation of the salient features of the evening’s material. After reading a thematically relevant selection from Savitri, the evening is capped with collective meditation. We’ve worked recently in Sri Aurobindo’s The Life Divine, The Synthesis of Yoga, Essays on the Gita, and The Mother. We focused too on the Mother’s Conversations, Notes on the Way, and a few volumes in her Questions and Answers series.

To prepare for a long study of Sri Aurobindo’s The Life Divine, we reviewed India’s spiritual tradition from the Vedic age to the present. Along the way, we examined core insights from the Rigveda, several Upanishads, the Bhagavad Gita, Buddhism, Jainism, the Yoga Sutras, the major schools of Vedanta, the Mahadevi tradition, Tantra, the Trika philosophy of Kashmir, Sri Vidya, and the bhakti tradition. 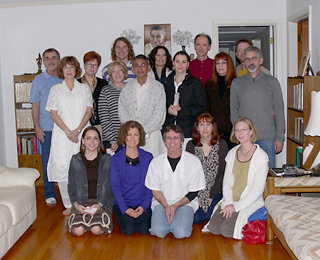 We read and discuss Sri Aurobindo’s correspondence in the volumes of Letters on Yoga (CWSA versions) at 4.30 PM Central Time. One may attend either in person or through Zoom. The session ends with a reading from Savitri or selections from Collected Poems, followed by meditation in the Shrine Room.

We offer two daily sessions in the Center’s Shrine Room with Sri Aurobindo’s Relics, the first from 7 to 7.30 in the morning, the second from 5.30 to 6 in the evening. At the close of the evening meditation, we read aloud two pages from Sri Aurobindo’s great epic, Savitri. The Center’s tradition is to read the first pages of the poem on the 15th of August, and to end with the closing lines on the following 14th of August. Thus we cycle through every annum with Savitri.

To enhance and offer context to the Integral Yoga, we occasionally offer public talks on topics drawn from the Indian spiritual tradition or current themes of conscious development. Over the years, these have included the Vedas, Upanishads, Bhagavad Gita, the Tantric tradition, Vedanta, Patanjali’s Yoga Sutras, Indian mythology, and transpersonal psychology. Collective meditation concludes these evenings. A scattering of the themes addressed include “Towards a Music of the Soul,” “Great Stories of Spiritual India,” “The Psychology of the Sutras,” “Yoga: Many Paths to Oneness,” “Myth and Mantra in the Upanishads,” “Gorakhnath, Lord of Yogis,” “Shankaracharya and the Essence of Adwaita,” “Hatha Yoga Pradipika,” “Sri Ramakrishna Paramahansa,” “Swami Vivekananda,” “Sri Ramana Maharshi,” and “Auroville: The City of Dawn.”

Each New Year’s Eve we gather for a common meditation which begins about half an hour before midnight. When the New Year arrives, we distribute calendars and prasad and the Ashram message. Everyone is welcome to join us.

We host special gatherings for each of the Darshan events associated with the Mother, Sri Aurobindo, and their Ashram. Collective meditations, presentations, distribution of messages and blessings, communal meals, are customary on these occasions. Friends join us frequently from both coasts and sometimes from overseas. As is the practice of the Sri Aurobindo Ashram, the day’s message cards containing passages from the works of the Mother and Sri Aurobindo are distributed to all who attend the Darshan. The schedule runs thus:

The Center occasionally sponsors weekend retreats which focus on dynamic aspects of spiritual practice. These retreats have been held both locally and afar, in Seattle, New York, San Diego, Auburn, and Magnolia Springs, Alabama. A few of the themes covered over the years include “The Soul Afire,” “From Death to Life: An Awareness Weekend,” “Women, Power, and Yoga,” “Beyond Suffering,” “Building a Community of Consciousness,” “Ensouling the Personality,” ”Understanding World Events from the Inside Out,” “The Practice of Peace,” and ”Power in the Practice: The Technique of Tapasya.”

The Center occasionally screens significant films dealing with the growth of consciousness. Again, the public is welcome to attend all events without charge.